The PEEM end-station consists of an Elmitec LEEM/PEEM III with a Kirkpatrick-Baez refocusing mirror pair focusing the beam down to 12 x 36 µm2 (footprint on the sample).

Photemission electron microscopy (PEEM) is a specialized technique for advanced studies of morphology, electronic and chemical properties, and the magnetic structure of surfaces, thin-films and interfaces with spatial resolution at the nanometer scale. PEEM microscope belong to the family of so-called cathode lens microscopy, where the sample is a part of the objective – cathode that emits electrons. In a standard PEEM setup a UV lamp acts as a photon source. However, Elliptically Polarized Undulator installed at the DEMETER beamline variable polarization soft x-rays are delivered to PEEM.

Photon are impinging the sample 16o with respect to the sample surface, what is schematically shown in Figure. The sample  illuminated photon beam emits electrons which are further transmitted to the imaging chamber, creating the recorded image. The elastically scattered electrons together with others emitted from the sample are transferred to the imaging column through transfer lens. At the end of imaging column, the multichanelplate MCP detector is installed which amplify the numbers of electrons that hit the phosphorus screen. In order to create the microscopic image of the sample, the column is equipped with a system of electromagnetic lenses: a transfer lens that transfers electrons from the beam separator to the column and indirectly corrects the beam, an intermediate lens that selects the operating mode between real and diffractive imaging, and two projection lenses that magnify the image. Just behind the lenses, the multichanelplate MCP detector act as an image intensifier.

(a) PEEM diagram (b) Elmitec III PEEM in Solaris Synchrotron

In addition to x-ray absorption spectroscopy, in PEEM microscope we can perform microscopic X-ray photoemission spectroscopy (μ-XPS) in which a micrometric-sized area is selected. The dispersion plane of the analyzer is then projected onto the detector, whereby the photoemission spectrum from the selected area on the sample is recorded in one shot  enabling real-time microspectroscopy. The spectral width is approximately 10 eV with a resolution less than 0.15 eV.

X-ray photoelectron diffraction (XPD) is another working mode that can be applied at PEEM microscope. It allows for imaging several Brillouin zones simultaneously for the selected kinetic energy of electrons. This method is especially useful for studying the dispersion of the valence band in micrometer size regions.

The standard operation conditions: the sample is at a high potential of 15 kV and 2 mm from the objective lens. Limited field mode (10 kV at the same working distance) is available for special samples and / or sample holders with an increased risk of discharge, such as insulating samples, surface electrodes, degassing surfaces, etc.

In a photoemission microscope with soft X-rays as an excitation source, XAS, XMCD and XPS spectroscopies are implemented with a lateral resolution of tens of nanometers. In this way, surface imaging with chemical, electronic and magnetic sensitivity is realized.

The station is equipped with an Elmitec photoemission microscope PEEM III with energy analyser. Samples are mounted on dedicated holders.

A preparation chamber, directly attached to the microscope, is as a standard equipped with: 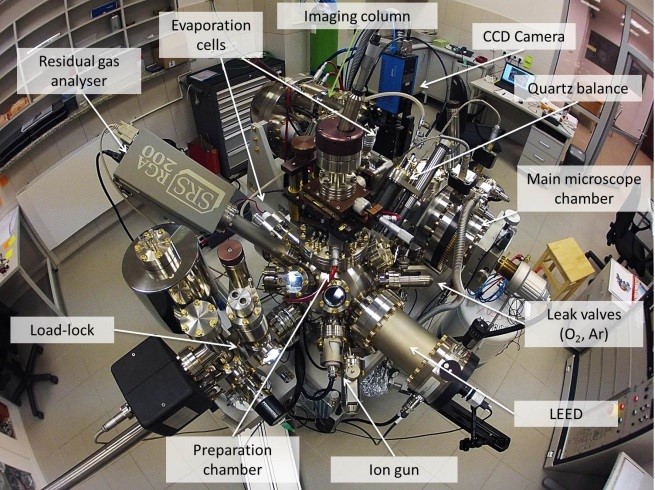 The incidence angle of the synchrotron beam is fixed to the 16 degrees. The sample can be rotated over 360 degrees about the axis normal to the sample surface (azimuthal). 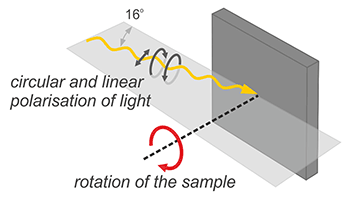