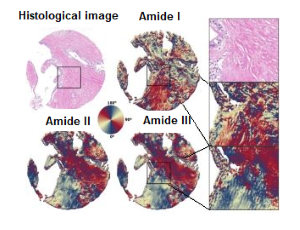 Fourier-transform infrared spectroscopy (FT-IR) in combination with machine learning and chemometrics is an intensively developed, powerful tool for investigation of tissue biochemical composition with simultaneous microscopic visualization. This nondestructive, information rich and label-free technique has been successfully applied in cancer diagnostics. During the development of a disease or inflammatory processes, not only the chemical composition of tissues changes, but also their spatial organization. FT-IR imaging with linear polarization can provide new and useful information about chemically-specific orientation of macromolecules. The team of SOLAIR beamline presented their results of spatial macromolecular orientation in human, pancreatic tissue using four-polarization FT-IR method.

The most common clinical technique used in cancer diagnosis is histopathology. Microscopic examination of tissues to study the structural changes caused by disease is difficult to interpret because of complex chemical and spatial structure of tissues, despite the development of modern instrumental methods. A fairly new and intensively developed approach is the use of Fourier-transform infrared spectroscopy (FT-IR) in combination with machine learning and chemometrics for characterization of pathologic states. FT-IR technique relies on molecular vibrations, allows to analyze qualitatively and quantitatively chemical composition of tissue with simultaneous visualization at the same scale as traditional microscopy.

The team of the newly constructed SOLAIR beamline presented their research results on human pancreatic cancer tissues with the use of IR spectroscopy. Changes in content of lipids, protein, polysaccharides, nucleic acid and structure of tissue can serve as an indicator to distinguish between normal and cancerous tissue. Although most cancers develop in the epithelium, it is well known that the effect of the stroma on its progression is significant. Fourier Transformed Infrared Spectroscopy is very useful tool to investigate primary and secondary structure of collagen. Three characteristic bands from amino acids can be found in FT-IR spectra range called “biomolecule fingerprint”. The first application of the four-polarization method to human tissue showed that calculating Herman’s orientation function and obtaining the azimuthal angle of selected vibrational modes is feasible and opens up new avenues in studying biological material.

More about the conducted researches you can read here 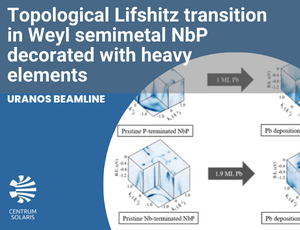 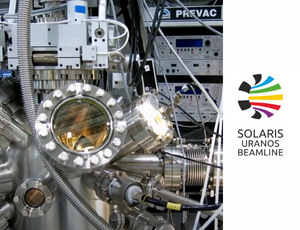 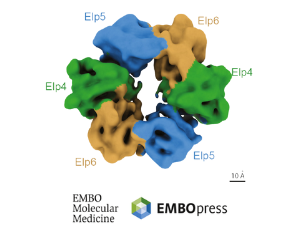