Kraków is the second largest city in Poland (after Warsaw), with a population of 780,000. It is situated on the banks of the Vistula river in the south of Poland, and is the administrative centre of the Małopolska voivodeship.

Having in former times been the capital of Poland and the royal seat, it is rich in historic structures, and the entire Old City has been entered into the UNESCO list of World Cultural Heritage sites.

Nowadays, Kraków is the administrative, cultural, educational, economic, and service industry centre of the region. In 2019. the city was ranked 6th in the global ranking of best locations for companies in the modern business solutions (BPO/SSC) and new technologies sectors.

Kraków is also home to one of the two best Polish universities, the Jagiellonian University, making it an important point of the national academic and research map.

In 2019, Kraków hosted 14 million tourists, drawn by the delightful architecture as well as the magical atmosphere and lively nightlife of the city. From among the many attractions the city has to offer, we recommend to those in the city for purposes of using the SOLARIS Centre who may have limited amounts of time, the following: 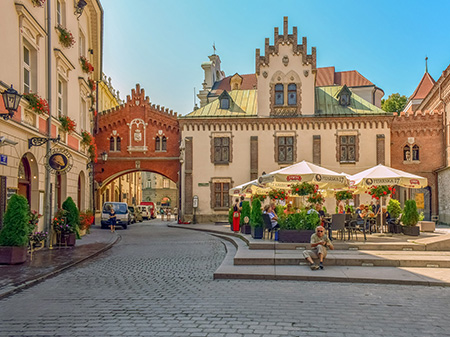 The Main Square (Rynek Główny) in Kraków and the Old City (Stare Miasto). In the Main Square, visitors can enjoy the medieval Sukiennice Cloth Hall, which features dozens of stalls offering typical souvenirs of the city and region, as well as St Mary’s Church, which features an altar created by the famed sculptor Veit Stoss (one of the finest late Gothic works of sculpture in Europe). The Square is surrounded by pleasant cafés and garden restaurants. A characteristic feature of the Old City are the cafés and clubs located in underground cellars scattered among the streets of the Old City leading into the Square.

The Planty park. This is an exceptional green area which surrounds the Old City on the land previously occupied by the medieval city walls. With the Planty or in its immediate vicinity, there are many historic structures, such as the medieval Barbican or Floriańska Gate, as well as the royal castle at Wawel.

The Museum of the Princes Czartoryski in Kraków. The museum houses the most precious collections in Poland, which is also one of the most precious in Europe as a whole. Featured works include Leonardo da Vinci’s “Lady with an Ermine” and Rembrandt van Rijn’s “Landscape with the Good Samaritan” as well as many other masterpieces, not only paintings but also sculpture, handicrafts, military antiques, and works of applied arts.

The Oskar Schindler Enamel Factory. The exhibition displayed in the factory, “Kraków under Nazi Occupation 1939–1945” tells the story of Kraków and of the fates of its ethnically Polish and Jewish inhabitants during the terrible days of World War II. The museum also highlights the figure of Oskar Schindler, the hero of the award-winning Steven Spielberg film “Schindler’s List”.