The bending magnet beamline ASTRA (former SOLABS beamline) - Absorption Spectroscopy beamline for Tender energy Range and Above - will be dedicated to X-ray absorption spectroscopy (XAS) and related techniques in the energy range from 1 keV to 15 keV, covering the K absorption edges of chemical elements between Mg and Se along with the L and M edges of many other elements. XAS is a non-destructive, element specific characterization method which can be applied to both crystalline and amorphous materials, liquids and samples in the gas phase. Moreover, XAS measurements can be performed under application relevant conditions (in situ). Both XANES (X-ray absorption near-edge structure) and EXAFS (extended X-ray absorption fine structure) data contain valuable structural information about the atomic environment of the absorber atoms in the materials under investigation. At ASTRA XAS spectra can be recorded in transmission or fluorescence mode.

The beamline ASTRA is intended for fundamental and applied research in:

In January 2022 start of commissioning and operation with the first group of ´friendly users´ (already experienced in X-ray absorption spectroscopy and willing to tolerate occasional complications of a beamline not fully commissioned yet) took place. Commissioning and development of the beamline are now in progress. Nevertheless, the beamline will be opened for the Spring 2022 Call for proposals, giving interested users the possibility to apply for  XAS measurements only in transmission mode at room temperature in the energy range 1.82 – 12 keV, covering K absorption edges of chemical elements between Si and Zn, L edges between Rb and Pt and M edges between Gd and U. We encourage our users to apply in this call mostly for experiments at K absorption edges, however, applications for measurements at L and M edges are also welcomed. The beamline staff work hardly to implement fluorescence and TEY modes for our users ASAP.

The ASTRA beamline was especially designed for XANES/EXAFS measurements in the tender X-ray range, i.e., at the K absorption edges of important elements such as P, S, Si, Al and Mg. Besides, ASTRA` energy range also includes K-edges of heavier elements up to Se, L-edges of elements up to Bi and some M-edges of elements including U, which allows investigation of a variety of highly relevant materials. 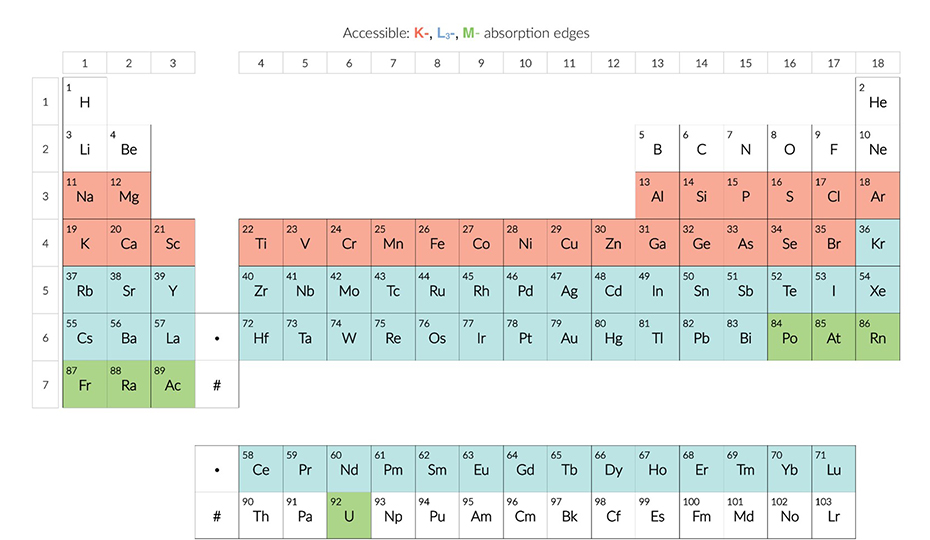 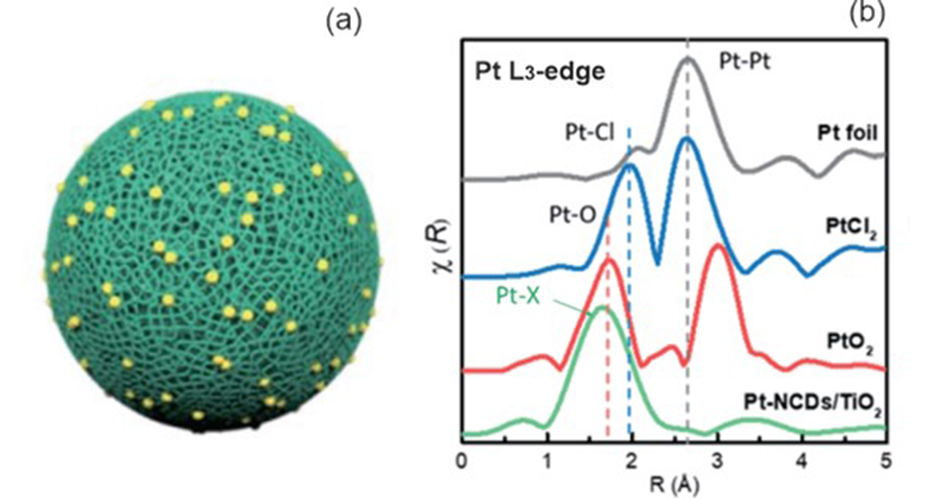 (a) Schematic illustration of Pt atoms deposited on nitrogen-doped carbon dots (Pt–NCDs) and (b) Fourier transformed Pt L3-edge EXAFS spectra of Pt–NCDs hybridized with TiO2 film, and of PtO2, PtCl2 and Pt foil as references for comparison (measured at beamline B18, Diamond Light Source).

The absence of a scattering peak in the region 2-3.5 Å, corresponding to a Pt-Pt bond, indicates that only isolated Pt atoms are bound to the NCD support, and the single peak at 1.6 Å reveals that they are coordinated to light atoms (4-5 carbon atoms) on the support.

This example shows that EXAFS data can be used to distinguish between single-atom catalysts and small clusters or nanoparticles bound to the support. Pt single-atoms are important as catalysts for photocatalytic hydrogen production. 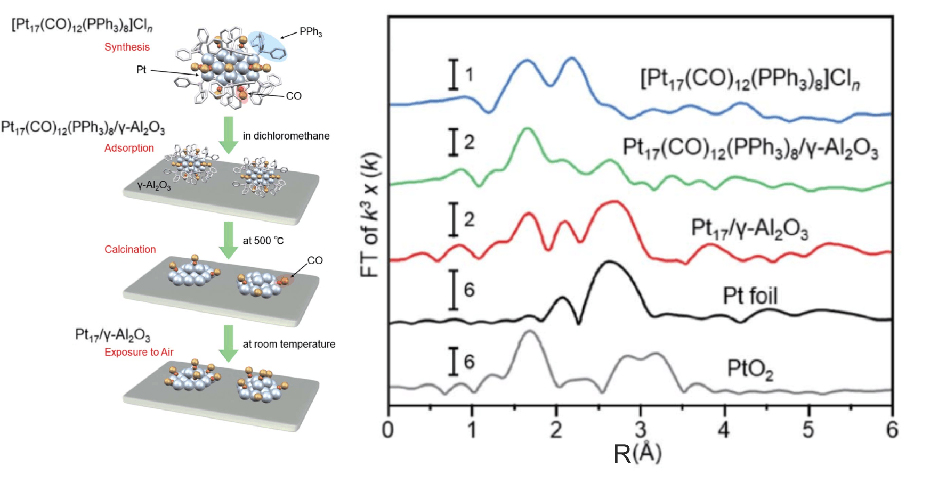 EXAFS data shows that in the Pt17/γ-Al2O3 system the supported Pt17 is not present in the form of oxide but has a framework structure like a metal cluster. Moreover, it was shown that supported Pt17 clusters are covered by CO molecules at normal temperature. CO molecules adsorbed on fine Pt17 supported clusters generally has a longer C–O bond compared to larger Pt supported nanoparticles, promoting the oxidation reaction and possibly contributing to the high catalytic activity of the Pt17/γ-Al2O3 system for carbon monoxide and propylene oxidation in comparison to γ-Al2O3-supported larger Pt nanoparticles (PtNP/γ-Al2O3)prepared by conventional impregnation.

XANES spectra are highly sensitive to the coordination environment of the absorber atoms (e.g., oxidation state) 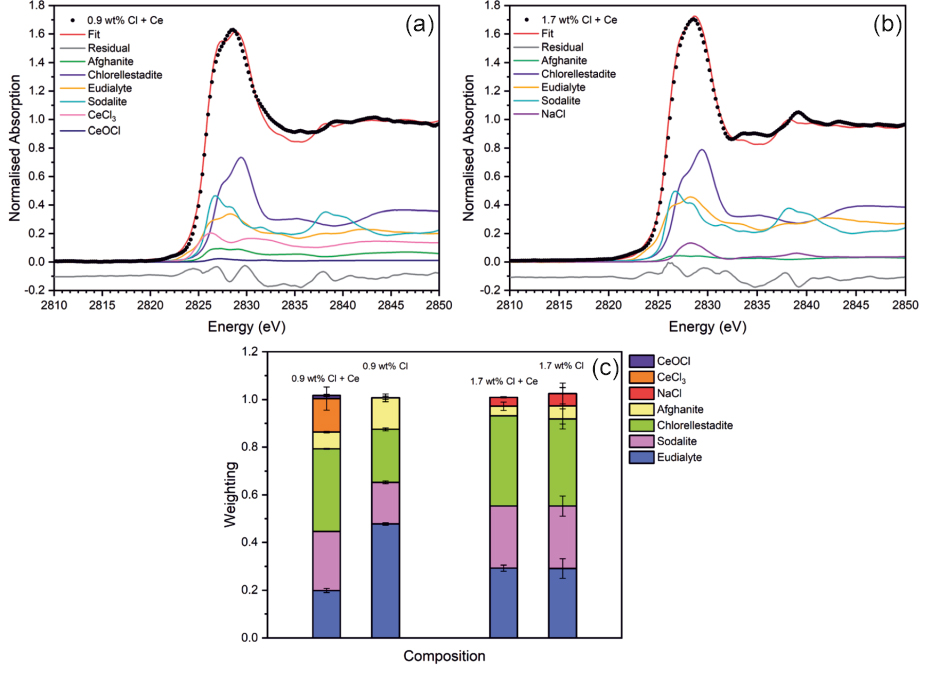 Linear combination fitting (LCF) of Cl K-edge XANES spectra of Ce glass-ceramics with nominal (a) 0.9 wt% Cl and (b) 1.7 wt% Cl; (c) comparison of the weighted contributions of reference compounds fitted to the Cl K-edge XANES data of Ce-free and Ce-incorporated glass-ceramics (samples were fabricated with CeO2, which model a PuO2 surrogate). XANES spectroscopy was used to investigate the potential application of an albite glass-zirconolite ceramic material for immobilisation of chloride contaminated plutonium oxide residues. XANES data confirm partitioning of Cl to the glass phase with exsolution of crystalline NaCl above the chlorine solubility limit. LCF results indicate an association of Cl with Na and Ca modifier cations, with environments characteristic of the aluminosilicate chloride minerals eudialyte, sodalite, chlorellestadite and afghanite. This study demonstrates the compatibility of the glass-ceramic wasteform toward Cl solubility at the expected incorporation rate (below the determined solubility limit) and provides confidence that upstream heat treatment or blending of waste feed are not required. 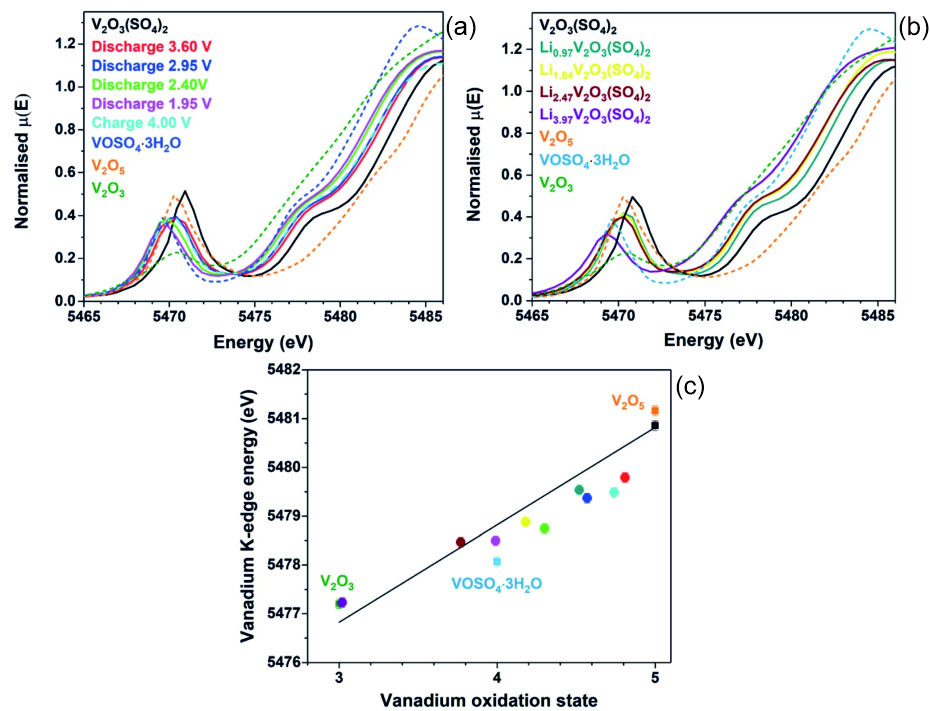