The source of radiation in the case of infrared beamlines is the bending magnet. The extraction of infrared radiation from synchrotron radiation is done using first flat mirror (M1), which will be located in the VK1 vacuum chamber in which the electron beam circulates. The planned distance of the M1 mirror from the beginning of the magnetic field is about 800 mm, while maintaining a distance from the electron beam equal to 14 mm will allow to obtain the distribution of infrared radiation intensity on the M1 mirror shown in Figure 1B.

Infrared radiation has two real sources: the Bending Magnet Radiation (BMR) and the edge of the field at the entrance to the magnet (ER - Edge Radiation). Figure 1 shows the distribution of infrared radiation intensity for two wavelengths: 10 μm (1000 cm-1) and 200 μm (50 cm-1). BMR is visible in Figure 1B (λ = 10 μm) in the form of horizontal stripes with two intensity maxima. Whereas ER is visible in the form of characteristic high-intensity rings, it is the result of interference from infrared radiation emitted by an electron located in two different magnetic fields - at the beginning and end of a straight section. For a wavelength of 200 μm, the predominant input has ER intensity, while for 10 μm wavelength the input of both BMR and ER is visible.

To prevent the M1 mirror from being damaged by high-energy X-rays, it will have a horizontal gap in position 0 (Figure 1B) with a width of 2 mm, which will allow the high-energy radiation to pass to the appropriate absorber. Infrared radiation reflected from the M1 mirror at the right angle will be directed outside the VK1 chamber to a further system of five mirrors - M2 to M6 (Figure 1A) to ensure, correction of chromatic aberrations and directing the infrared beam towards the exit from the storage ring and to the end stations, by applying the appropriate curvature of the mirrors and reflection at the right angle.

In the planned optical system there will be a diamond window (CVD) between the M4 mirror and the M5 mirror in the place of the first focus of the infrared beam. The entire optical system up to the CVD window will be in a high vacuum system, corresponding to the vacuum held in the ring. Behind the CVD window the beam will be guided in a low vacuum. The total intensity of the infrared beam at a distance of 5 m (approximate position of work stations relative to the M6 ​​mirror) from the M6 ​​mirror is shown in Figure 1C.

Figure 1. Diagram of the optical system of M1 to M6 (A) mirrors for the extraction of infrared radiation in the Solaris synchrotron with beam cross-sections behind the M1 (B) mirror and after the M6 ​​(C) mirror

Infrared radiation will potentially be brought to four end stations via Beam splitters. The beam of infrared radiation obtained with the optical system designed in such a way will be characterized by a wide spectral range, high radiation intensity and high correction of chromatic aberrations, which will enable performing a new quality of research in many fields of science. Three experimental stations are planned at the CIRI line, one of them will be designed for a classic FT-IR microscope with an FPA detector enabling IR imaging, while the other one will be equipped with an AFM-sSNOM-FT-IR microscope, which will allow the analysis of samples on a nanometric scale. Below are examples of tests performed on such microscopes using synchrotron infrared radiation. 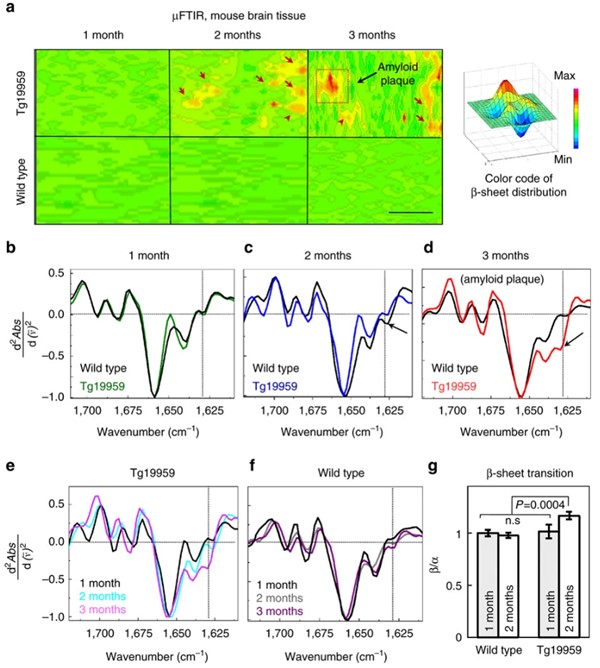 Figure 2. (a) FT-IR integration maps for the β-sheet spectral region at 1635-1620 cm-1 to visualize the absorption intensity for β-sheet content in Tg19959 brain sections (upper panels) and wild-type mice (lower ones) panels. Scale bar, 50 μm. (b) Averaged and normalized second derivatives of the amide I absorption band. (c) Averaged and normalized second derivatives of FT-IR spectra taken from areas with increased β-sheet content on the appropriate μFT-IR maps. (e) Overlapping of the second derivative of the corresponding Tg19959 mouse of different ages more clearly shows the progressive increase in β content with age. (f) For comparison, the overlap of second derivatives corresponding to wild-type mice of different ages is similar. (g) Statistical analysis of β-sheet content measured as the mean ratio of peak intensities between 1635 and 1620 cm-1 (β-sheet) to 1665 cm-1 (α-helix) in Tg19959 mice and wild-type mice as a function of age.
Reproduced from O. Klementieva, K. Willén, I. Martinsson, B. Israelsson, A. Engdahl, J. Cladera, P. Uvdal, G.K. Gouras, Pre-plaque conformational changes in Alzheimer’s disease-linked Aβ and APP, Nat. Commun. 8 (2017) 1–9. doi:10.1038/ncomms14726.

Two aspects of synchrotron are very beneficial for the IR imaging: high intensity in the confocal configuration and a wide spectral range. Conventional IR thermal sources like Globar with 10 x10 µm aperture available are 10 times less intense than synchrotron. This allows the use of available spatial IR mappings up to the diffraction limit. It is a perfect match for systems with AFM. In these systems the added benefit is the wide spectral range, reaching far infrared, where there is a lack of intensive conventional sources. Thus, nanoscale imaging is available at a synchrotron in the range below 800 cm-1.

The beamline is constructed in the close cooperation with the Faculty of Chemistry of the Jagiellonian University and the Institute of Nuclear Physics of the Polish Academy of Sciences, represented by:

Summary of the beamline parameters

CIRI beamline is under construction and will be available for users in 2023.